DJs: KERN/WÖGINGER (A), DORFMEISTER (A)

Sub’tronic, the musical night programme of Ars Electronica 96, runs the gamut from entertainment to modern electronic art-music. You can have it all – from the state of hyperventilation and accelerated audio-alpha activity, from the transformation of the guitar into some kind of a machine, and hypnotic dub-subsonics, to a music on the level of macrostructures and complex numericism in its composition – you can experience the lot, in the pot protected by the night and topped by the Sub’tronic identifier. The key-words are sub’bass, sub’harmonics, sub’culture, sub’stance, sub’somic, sub’versive …

The musical night program of Ars Electronica 96 takes place in three venues separated both spatially and thematically: in the open air, indoors, and at the conversation bar.

Location 1: In the external surroundings of the AEC the musicians and sound engineers involved have of necessity to come to terms with the architectonic situation, as the fleeting medium of music must be directed into underpasses, glass domes, and in the open air in a specific direction. Three spots will be manned which are normally utilised by traffic: a closed-off street in an underpass, bus shelters, and an adapted train. At all three locations there will be live performances, with the musicians being challenged not by prescribed themes, but simply with the task of acoustically "managing" the space.

Location 2: The interior space of the enclosed courtyard of the Stadtwerkstatt will be a "dance-floor", laboratory, sound studio or/and workstation for mixed-media performances. It ranges over two stories and can be looked into from two sides. The interior space will be served by two different sound systems, the entrance area of the Stadtwerkstatt receiving sound only via sub-bass systems and small satellites. On the first floor all the musicians’ signals will be transmitted faithfully. One and the same concert will be at the same time an environment [entrance area] and a performance [first floor].

Location 3: A functions room will be turned into a bar. This location is in the Stadtwerkstatt, not far from the Ars Electronica Center. The bar, as a communication cell, will be acoustically furnished by a specially-designed sound system in such a way as to give priority to interpersonal communication. There will be no DJ or musician demanding the attention of the audience. The public is the star, and thus the light. The musical ambience will be programmed by musicians of the Sub’tronic series and overplayed by the band on the basis of "What kind of music can you take after a day at the Ars Electronica Festival?" The bar will be set up in collaboration with the Stadtwerkstatt and run by a perfect catering team into the small hours.

COMPUTER MUSIC IS DEAD, LONG LIVE THE COMPUTER AND THE MUSIC LIBERATED FROM IT

The term "computer music" is defined, in the history of the Ars Electronica Festival and the Prix Ars Electronica, generally via appliances and their independent life, via the software used and the performance of mathematical processors. The battles of matériel and the electric bombast from the early days of the Ars Electronica are a witness to this. In a large number of performances one can speak of more or less successful attempts at composition, but certainly not about aesthetic successes. Iannis Xenakis himself deplored the inadequate results, saying that, "The hope of an out-of-the-ordinary success emerging from out-of-the-ordinary technology turned out a fatal deception."

In those days computer music was connected primarily with institutes and departments of electro-acoustics at universities, was administered academically, but certainly not taken further in a pop context.

"Musique concrète, Dada poetry, John Cage, Fluxus and the graphics of Bauhaus artists, all sacred cows of the avant-garde art of this century, were taken by the DJ, unknowingly, but thus all the more naturally and gracefully, and made compatible with pop and thus comprehensible for the mass of people." [from "Techno" by Anz/Waldner]

It is true that technological acceleration, the price slump and the commercialisation of entertainment electronics have led to the emergence of a new type of musician. No longer are the appliances the centre of artistic creativity, but rather the context in which the work is created and in which it is performed. The "independent world of the apparatus-world" [Peter Weibel] is a further topic, although the "techno-accident", the dysfunctioning of appliances under altered technical modes of operation, or operation in violation of the instructions for use, have assumed a particular significance here. Modifications of obsolete analog systems and their application and investigation have also sometimes aroused in the young generation of musicians that intensification of interest which has led them to follow in the footsteps of the Cologne School, of Xenakis, La MonteYoung and Steve Reich – the computer as a simple tool for arranging digital abstractions, analysing and transporting them. Computer music is dead, long live the computer and the music liberated from it. Moving on, the attention is drawn to interface designs, although we must here consider not only technical, but also neuronal or socio-cultural interfaces. It has been shown that accelerated alpha-activity can be triggered by music. "The formula comprises music, sounds and syllables and pulse-beats of specific frequencies, whose characteristics tend to promote a condition of concentration, open up psychological areas and, under certain conditions, effect a temporary alteration of consciousness." [Adi Newton – The Anti Group, 1990]. Through the effects of specific light and sound frequencies, dreamlike hypnotic states can be achieved. "Mind machines", working primarily with light impulses, [promoting alpha-wave activity in the cortex], gave rise to a veritable boom in the early 90's among civilisation-stressed success types. Techno-shows, with their optimum matching of sound and light, were able to enhance further similar phenomena, thus creating the basis for technological trance induction, a form of high-tech shamanism. In not a few cases designer drugs are used as interfaces [prosthetic consciousness] for "tuning-in".

IT'S NOT THE TUNE THAT COUNTS

"What I have learned from analysing the new music of the 20th century and what I then applied to techno is the realisation that structure, sound and consistency are the key elements of electronic music. It's not the tune that counts. I believe that in techno there are certain sounds and consistencies which affect everybody in the same way. This is a psycho-acoustic effect." [Christian Vogel, Spex 1/95]

In the wake of techno, styles such as ambient, electronic dub, trip-hop, bass & drum, jungle and noise have spread in all conceivable variations like a wildfire out of control. It should be noted that in the age of the data highway the protagonists of these genres live away from the pop capitals, developing their style in regional seclusion, but accustomed nonetheless to acting globally via media and networks. By contrast to pop, where the head is the goods and modern icons are de facto created for the consumer society and the leisure society, most of the protagonists of these electronic Sub'areas proceed without taking account of the current dictates of pop, thus pollinating the pop industry as this latter marches on the spot. [Examples: Tricky, Portishead, Aphex Twin …]

The fact that the so-called underground is the supplier of new trends and aesthetic innovations is formulated by Dr. Smudits in Skug #26 as follows: "For in contrast to the struggle between various part-cultures of a society, characterised by a striving for dominance, there exists between the transculture and local [regional, national] cultures a symbiotic relationship, with diffusion being fundamentally possible in both directions. Local cultures represent a potential of un-used-up forms and contents for the "transculture". In this way the transculturally-aligned marketing machinery that tends towards standardisation receives new symbols and signs, at the same time as placing internationally styles as yet unknown. In this connection the continuing techno boom leads not to a market domination and hollowing-out of content, but also creates space for new signs and codes in the underground. The diversification works against entropy and creates latitudes. Where Christian Vogel speaks of empirically-demonstrable effects of certain sounds and consistencies on the individual in the mass, other musicians attempt to counter the letting-oneself-drift syndrome by means of technology. A new, if small, musique concrète movement is evidence that digital abstractions are orbiting around new topics such as space extension versus micro-spaces, and old topics such as music as a designed noise are once again very much topics. "Music as structured sound, chaos, as a heterogeneous/individual becoming without a centre, as organisation of sounds, impulses, fragments/trouvailles, DJ-tools, but fortunately far removed from standardised sound which still operates with recognisable tone-series at the centre of events." [Didi Neidhart, Skug].

What also counts is the fact that production processes are being made transparent, and the character of the material emphasised. The selection of the acoustic raw materials and their modulation, transformation and design generate for the artist and for the listener new possibilities of reception. These "improvisations" with acoustic materials, the organisation of new reception patterns and their documentation are fresh evidence of the will to give the "sound" an "instrumental body". And these bodies are then known as Locust, Autechre, Alois Huber or Pulsinger. 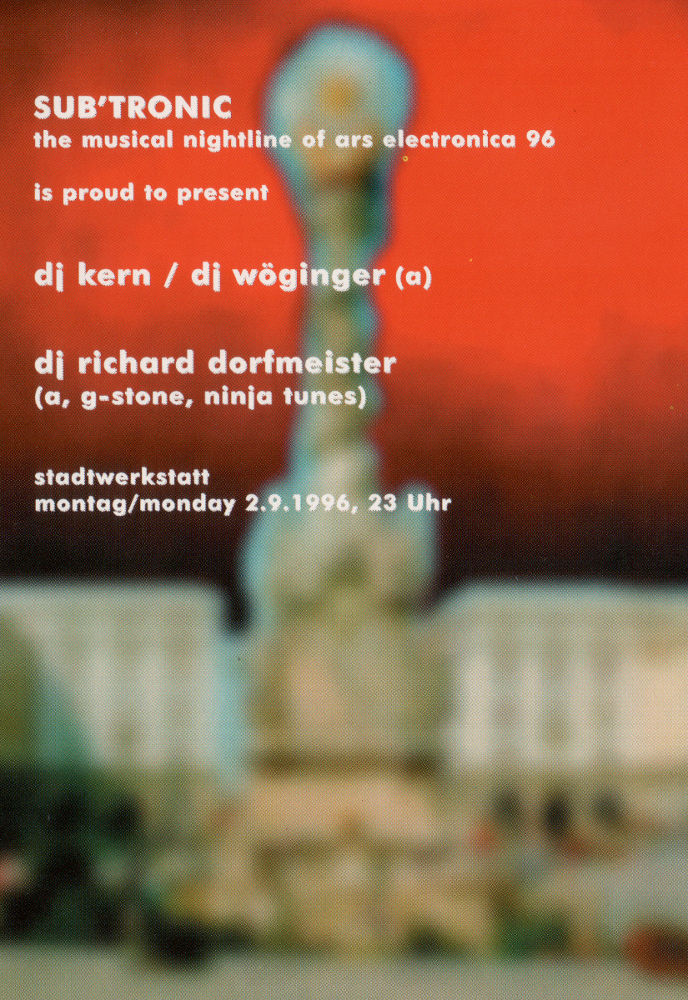 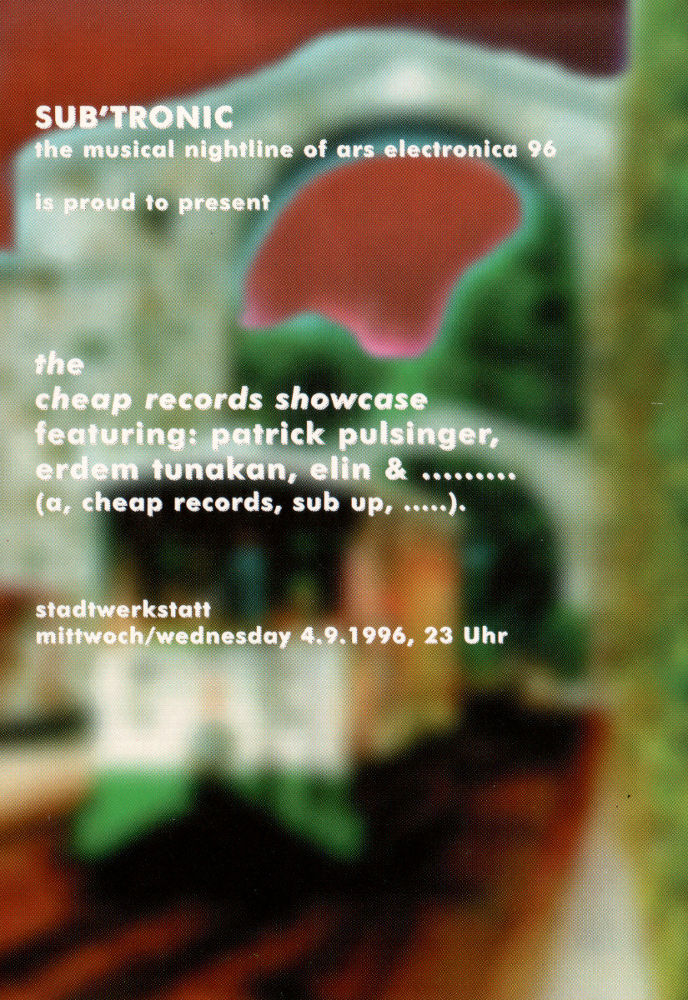 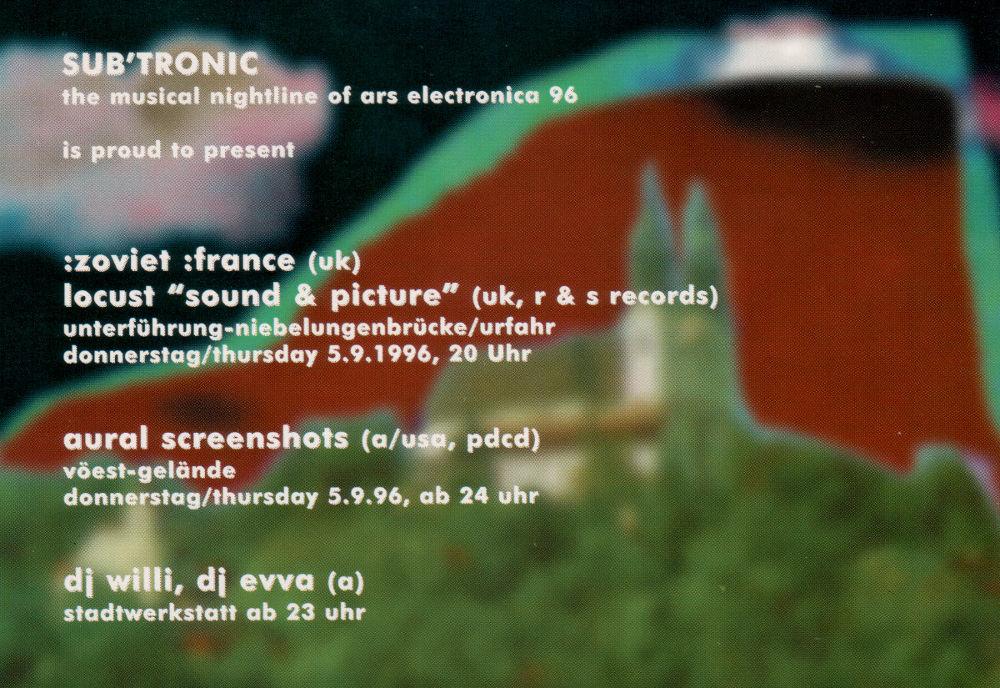 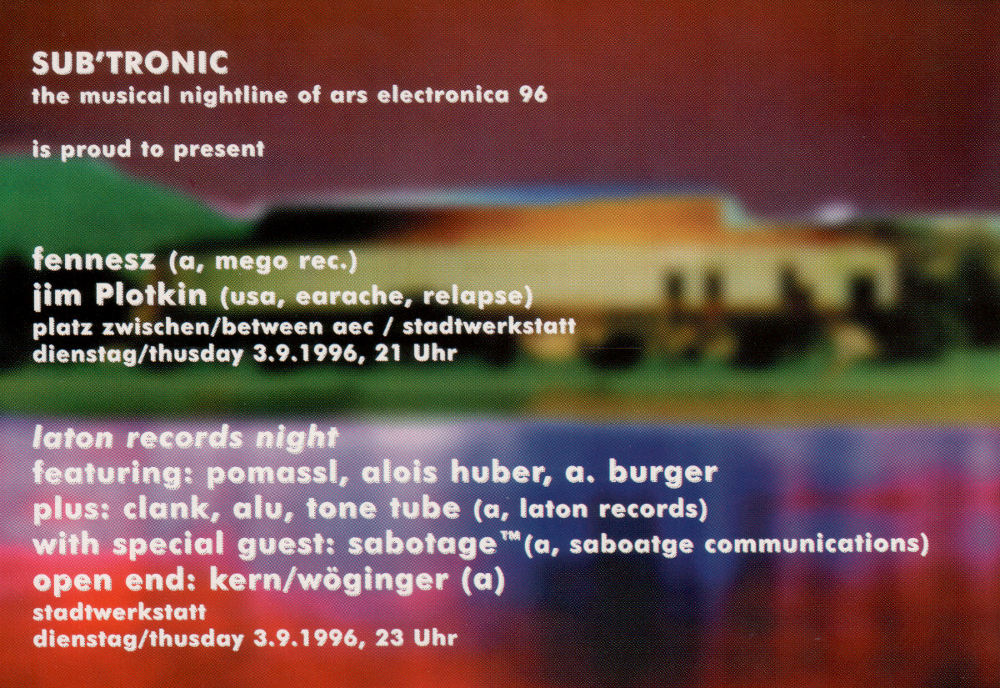